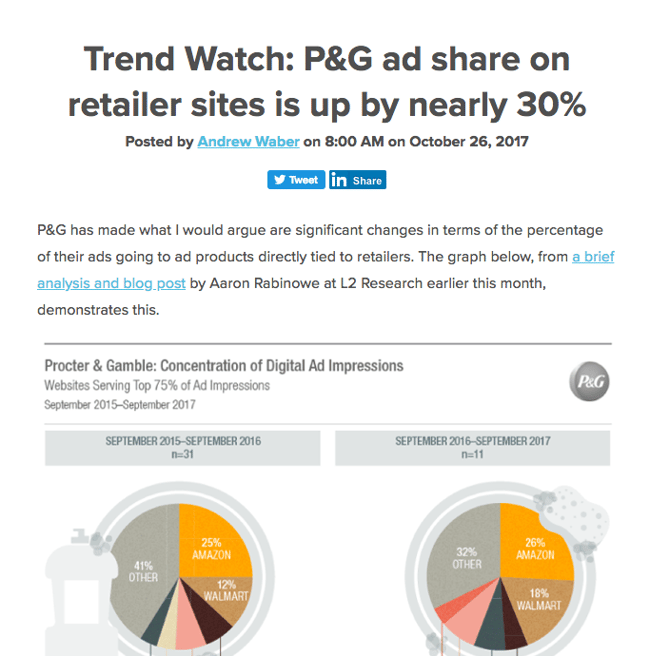 It's official – P&G did indeed drastically restructure their digital advertising in 2017, to the tune of $200 million. To be clear, what P&G did was dramatically reduce what could be considered "traditional digital advertising spend" – via ad networks and associated agency fees. The company only moderately reduced its overall ad spending, going from $7.2 billion in ad spend the prior fiscal year, to $7.1 billion.

As Suzanne Vranica at the Wall Street Journal notes:

"The company…shifted those digital dollars into other areas including TV, streaming services such as Pandora Media Inc., and e-commerce giants such as Amazon.com Inc. and China’s Alibaba."

Way back in October 2017, we published a blog post that riffed on some data from L2 regarding the allocation of P&G's ad impressions on a site-by-site basis. We believed that the increase in the share of impressions on retailer sites represented a significant change in P&G's overall approach to its digital ad spending, then. 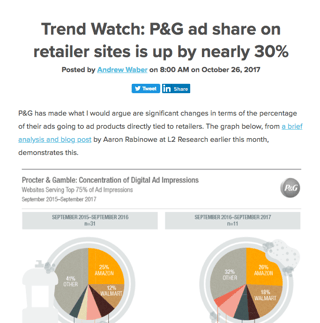 It's nice that we were right on this one, BUT it's more important to note how big a deal this is within the industry. P&G is putting significant amounts of its money towards advertising on Amazon, Walmart, and other retailers because they are finding that it works much better from an attribution and ROI perspective than the traditional methods they had been using. It should also signal to other brands that these channels are worth investigating and investing in.

Read the full, original piece for a more complete picture of our argument.

Brand manufacturers shouldn’t see Amazon merely as an ecommerce channel — it’s an ecommerce necessity. But standing out on the crowded marketplace can be a challenge.
Read More
Omnichannel Strategy
|
2 minute read